skip to main | skip to sidebar

The good side of ice 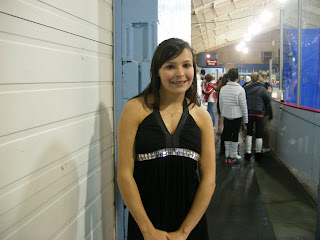 What week it's been. Last Sunday was spent skiing the heavy powder with my daughter Kelly (at right) at Jay Peak , where I wrecked more often than usual (once due to her) pushing hard to hammer through the heavy powder and glades. Just an awesome day. Then Thursday I skied the ice on Whiteface mountain in Lake Placid. Scary stuff it was due to an icy storm the day before, but when the sun came out in the afternoon, it softened up a lot and was almost like spring conditions.
This weekend was Kelly's ice skating show, for which I edited the program music. The image here is just prior to her group's "James Bond" number. This is her third year there, and she's progressed quite well from never having been on the ice before. A combination of natural athleticism and 5 years of gymnastics training allowed her to progress from "newbie" into the lower advanced levels in short order.
Posted by Rick at Sunday, March 09, 2008 1 comment: